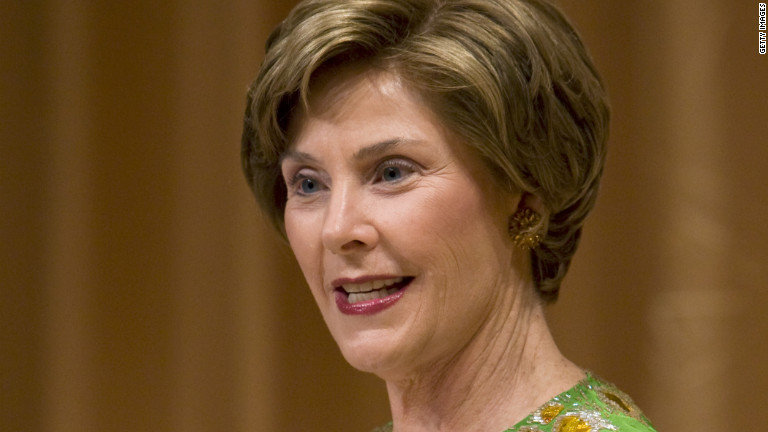 Here is a look at the life of Laura Bush, wife of former US President George W. Bush.

Has served on the boards of various institutions, among them the University of Texas Graduate School of Library and Information Science Advisory Council and the Reading Is Fundamental Advisory Council.

November 1963 – Seventeen-year-old Laura runs a stop sign and collides with a car driven by a friend. He is thrown from his car and killed.

1997 – Becomes involved in an early-childhood development initiative, called the Reach Out and Read program, aimed at helping parents and other caregivers to prepare preschool children for formal instruction in reading.

September 8, 2001 – With the Library of Congress, launches the first National Book Festival.

November 2001 – In a historic first, she records a full presidential radio address, speaking out on the plight of women and children under the Taliban regime in Afghanistan.

September 30, 2003 – Visits Russia as part of an education and literacy tour.

February 9, 2006 – Is received by Pope Benedict XVI at the Vatican.

November 2006 – Has a cancerous tumor removed from her right shin.

October 21, 2007 – Arrives in the United Arab Emirates to begin a four-day tour around the Middle East to raise breast cancer awareness.

August 2008 – In Thailand, she meets with refugees from Myanmar. Later attends the Olympic Games in Beijing with the president and former President George H.W. Bush.

May 11, 2010 – During an interview on “Larry King Live,” Bush comes out in support of legalizing same-sex marriage and abortion remaining legal.

May 10, 2016 – With daughter Jenna, publishes “Our Great Big Backyard,” a picture book to commemorate the 100th anniversary of the National Park Service.

June 17, 2018 – Writes an op-ed criticizing the current zero-tolerance immigration policy being enforced under the administration of President Donald Trump. Bush calls the separation of children from parents entering the United States illegally “cruel” and “immoral.”

Newspaper is your news, entertainment, music fashion website. We provide you with the latest breaking news and videos straight from the entertainment industry.